LED Lights and How They Help the Environment 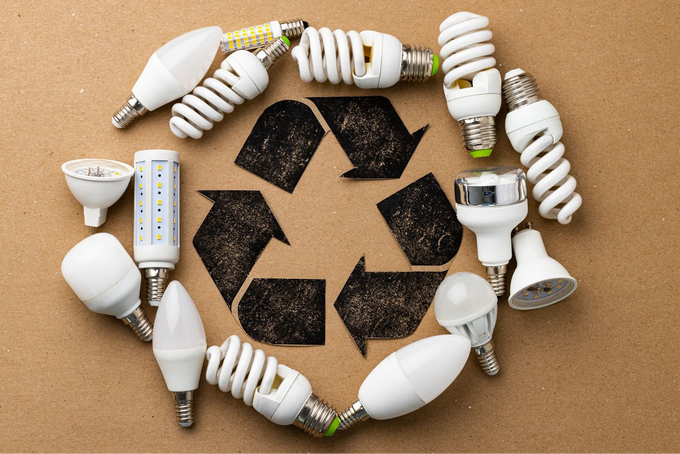 Once upon a time, sailors navigated by staying close to the coastline. That was the earliest trick of navigation--to follow the coast and identify landmarks. And if land was nowhere in sight, ancient sailors relied on the sun.

We've come a long way since those early seafarers. In 1835, there was a new light. Literally--the first constant electric light was demonstrated by British scientists in 1835, more than 40 years before Thomas Edison first patented and commercialized his first incandescent bulbs. As lighting systems became increasingly refined, they changed the way we live, allowing us to travel in the dark, to illuminate areas safely, and venture further than ever before.

Today, one of the fastest-growing lighting technologies on the market is the light-emitting diode, or LED. Where the first light bulb inventors wanted to create light, innovators of today want to shed a light on environmental impacts--and make a bulb that lights the way toward a brighter environmental future.

This starts at the most basic elements of the LED bulb--its materials. You see, when you're trying to build a better bulb, you have to start at the beginning.

Several materials on the list are used as a phosphor source, as phosphor-based LEDs are the most popular option for high-intensity LEDs. Many of the materials are also used for various components of the semiconductor, which is the most important part of the bulb, as LEDs become illuminated through the movement of electrons through a semiconductor.

Toxicity to the Environment

How do all of these materials translate to environmental toxicity? To understand how LED bulbs stack up to traditional lights, it first helps to look at what isn't present: mercury.

Compact fluorescent lamps (CFLs) are not to be confused with incandescents. Incandescents run an electric current through a wire filament, heating the filament until it starts to glow. CFLs drive an electric current through a tube containing argon and a small amount of mercury vapor, generating invisible ultraviolet light to excite the fluorescent coating (phosphor) inside the tube, which then emits visible light.

It's a clever system, minus one glaring problem: mercury is an incredibly dangerous neurotoxin, and exposure to it can create a wide range of adverse effects from sensory disturbances to "pins and needles" sensations to insomnia to memory loss. It's just as bad for the environment, as a ubiquitous endocrine-disrupting marine pollutant.

LEDs do away with the need for mercury vapor. Instead, these bulbs pass an electrical current through a microchip, illuminating light-emitting diodes to create light.

LEDs still contain some concerning materials, like lead and nickel. The worst offenders are low-intensity red LED bulbs, which contain eight times the amount of lead. However, white LEDs contain the lowest lead concentrations and lack many of the hazardous materials that make CFLs and incandescents require specialist disposal (otherwise, the materials leach out in landfills to contaminate the soil and groundwater).

In addition, because LEDs do not require specialist disposal (i.e. you don't need a truck to come and pick up your dead bulbs) it has a much lower carbon footprint at the end of its life. That might not seem like a big deal for one bulb, but think about that impact multiplied across hundreds or even millions of bulbs!

What if you didn't want to throw your bulbs away? What if you wanted to recycle those materials instead?

While the mercury and toxic materials in CFLs and other bulbs cannot be reused, recycling CFLs actually benefits the environment, since other materials used to craft the bulb can be reused. And in the process, you prevent the release of toxic materials in a landfill. Some jurisdictions actually require these bulbs to be recycled.

But what about LEDs?

Here's the good news: 95% of an LED bulb can be recycled. The bad news is that not all facilities recycle every part of the bulb, since not all facilities are equipped to process these bulbs (the cost of separating materials can be prohibitive for some). But you can still recycle your bulbs, if you're willing to do your homework.

Many big-box stores like Home Depot, Lowes, and even IKEA offer in-store recycling bins for LED bulbs. Contact your local store for details. In addition, many municipal safety departments offer specific days for LED and CFL recycling--just check with your city for details. Some hardware stores also accept LED bulbs for a fee.

And if you can't find a local option, some companies offer mail-in recycling options for a fee. It's not as easy as municipal recycling or dropping it off in a bin, but you can still put those precious materials to good use. 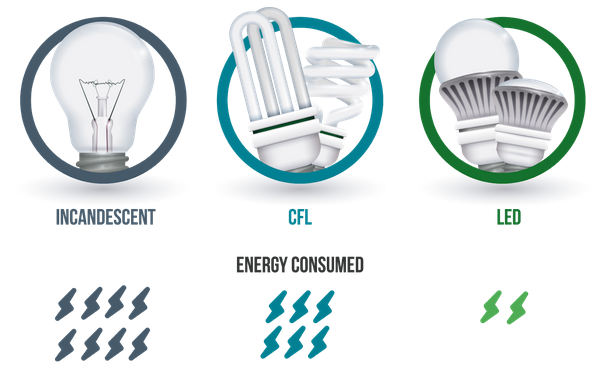 Of course, LED bulbs get the most credit for their energy efficiency compared to other light bulbs on the market. And when it comes to LED energy efficiency, the numbers speak for themselves.

Broadly speaking, LED bulbs use 25% to 80% less energy than traditional incandescents. To understand how that breaks down in the finer details, let's shine a light on individual bulbs.

Incandescent bulbs are considered the least energy efficient type of electric lighting, though many people still use them because they're cheap. There are three main types of incandescents:

The main point to be aware of with incandescents is that while they can cast the same amount of light as other bulbs, they burn through a lot of energy to produce that light. In fact, about 90% of the energy incandescents use is wasted as heat.

There is a form of energy-saving incandescent called halogen light bulbs. This is a type of incandescent that holds a special halogen gas around the filament to increase energy efficiency. Plus, there's an inner coating that reflects heat back at the capsule, thus "recycling" heat as more light. All told, this means halogens use about 25% less energy than traditional incandescents.

Still, CFL bulbs have halogen and incandescent bulbs beat by a long shot. While CFLs need a bit more energy to get going, once the electricity is running, CFLs use about 70% less energy than incandescents.

This brings us, at last, to LEDs.

In terms of the bulb itself, LEDs use about 75% less energy than incandescents. That's because the design of LED bulbs creates a far more efficient use of light and heat. Incandescent and CFL bulbs emit light and heat in all directions, which is why so much heat and light is wasted. LEDs are directional, meaning they emit light in a specific direction and thus waste far less energy and heat in the process.

That's not just great news for your budget. It's a fantastic investment in the environment, allowing you to use less energy and reduce your carbon footprint every time you switch on a light just by switching over to an LED bulb.

Of course, energy is just one part of efficiency and performance. You also have to think about the bulb's lifespan and how well it does its job. After all, if a bulb saves energy but doesn't have the performance to back it up, it's not very good at its job. Here's a look at a few other key features of LED bulbs and how they stack up to other available bulbs.

Life and Duration of an LED Bulb vs Other Light Bulbs

First, let's take a look at how long your bulb lasts. This is more than a question of convenience. If you have to replace your light bulb every time you turn around, it doesn't do much good that it's energy efficient--you're still burning through a lot of supplies to keep a set of functional light bulbs, and that's not any better for the environment.

Let's start with the lowest on the totem pole: the incandescent bulb. Unfortunately, not only is this light bulb inefficient, but it also has a comparatively short lifespan. Incandescents typically last for about 750 hours, or about 31 days altogether.

That might sound like a lot until you tally up the average lifespan of other bulbs. CFL bulbs are much more efficient than incandescents and they last remarkably longer, with an average projected lifespan of about 8,000. That's about 333 days.

Then there are LED bulbs, which blow both CFLs and incandescents out of the water. They last an average of 25,000 hours. For context, that means that if you left your light bulb on 24/7, you would only need to replace it every 15 years.

You also have to think about the performance of the bulb in question. If it's less of a bright light and more of an unintended mood light, it's not an effective light bulb.

But in order to talk about the area of coverage, you first have to understand lumens, foot-candles, and watts.

Lumens measure how much light you get from a bulb. In basic terms, more lumens means more light. However, light bulbs are sold by wattage, so it's more useful for the average consumer to translate lumens to watts. Watts are not a measure of brightness, but rather the amount of energy a bulb consumes to reach its desired brightness. Basically, watt measurements describe the rate of power flow.

For reference, a standard 100-watt incandescent bulb produces roughly 1,500 to 1,700 lumens. To be clear, a lumen is always a lumen, so 600 incandescent lumens gives you the same light as 600 LED lumens, but watts translated into approximate lumens can vary mildly between different types of bulbs.

Then there are foot candles. A foot candle is the illuminance of one square foot from a uniform light source. Or, in plain English, a foot candle is how bright a light is one foot away from its source. This is crucial in lighting an area.

To determine how many lumens you would need in a room, you first need the square footage and the type of room. Lighting experts recommend higher foot candle counts for certain areas that require a lot of visibility. A bathroom or kitchen, for instance, will have a higher recommended foot candle count than a bedroom.

Let's say you have a 120-square-foot area lit by a single fixture with two bulbs at 800 lumens each (a total of 1,600 lumens for the fixture). You can find this easily--energy efficient bulbs like LEDs have to have their lumen count printed on the package. 1,600 lumens divided by 120 square feet means the room gets 13.3 lumens per square foot from that light fixture. A living room is generally recommended to have 10 to 20 foot candles, which translates as roughly 1,000 to 2,000 lumens.

This brings us back to LEDs.

Thanks to new labeling requirements for light bulbs, you can now find the lumen count on the packaging. Once you know the lumens you need, you can look for bulbs with that lumen count and the lowest wattage for maximum energy efficiency.

Remember when we said LEDs are much more energy efficient than incandescents and CFLs? This is where that works out in your favor. You can get the same area coverage for a lower wattage, meaning you get the same great lighting with a reduced environmental impact.

Ultimately, LEDs are the smarter choice for the environment. They contain fewer toxic materials, require less energy to dispose of, can be recycled, and use energy far more efficiently, allowing you to get the same amount of light using far less energy.

Department of Energy. (2013, Nocember). The History of the Light Bulb. Energy.Gov.
https://www.energy.gov/articles/history-light-bulb

US EPA, OA. (2013, January 22). Recycling and Disposal of CFLs and Other Bulbs that Contain Mercury [Overviews and Factsheets]. US EPA.
https://www.epa.gov/cfl/recycling-and-disposal-cfls-and-other-bulbs-contain-mercury

US EPA, OCSPP. (2015, September 3). Health Effects of Exposures to Mercury [Overviews and Factsheets]. US EPA.
https://www.epa.gov/mercury/health-effects-exposures-mercury